A Blog for Saint Augustine's

My family and I came to live in Hulme in July of 1969 from Chorlton on Medlock. We were part of what was then called the slum clearance.  Our new house to us then was very luxurious with lots of space for us all. We were all very happy that we had chosen to come and live in Hulme.

The Holy Name Church was our Parish Church. I married there in 1963. My four children were baptised there.

When I discovered St. Augustine’s Primary school, which was perfect for my two five year olds, I decided to send them there. The bonus was finding the Church of St. Augustine’s Church just opposite the school.  It was a very exciting time in all of our lives. A new start for us all in bright clean surroundings.

My children settled well into school, and I quickly became involved it the PTA. In time, the children all made their Holy Communion and Confirmation here, and the marriage of one of my daughters was officiated by Canon Kevin O'Connor. He was unable to have a photo taken with the bride and groom, because he had to rush off to the Airport as a plane was on the tarmac at the airport waiting for him to join the Parish pilgrimage to Lourdes. He was well known as the late Canon O'Connor!

The Church was a very busy place. There were at least four priests living in the Presbytery: Canon MacClernan, Fr. O'Connor, Fr, Kenny, and Fr. Rudman. They were all lovely approachable priests, and the school children were very fond of them all. Fr. O'Connor stood out in his long black cloak that he wore, and the children fondly named him Batman. He was very active within the school, and he encouraged boys to become Altar Servers as soon as they made their holy communion. He was always assured of two altar boys at each daily Mass.

With two hundred and forty pupils at the school, the church was always very busy with Baptisms, First Holy Communions and Confirmations, as well as a thriving social life with Summer and Christmas Fayres.  Christmas dinners were also prepared by the Nuns, who would rope in as many mothers as they could to help serve the food.

Canon O’Connor was very good at getting people involved in the life of the parish. I would find myself accompanying another helper, Bill Grundy, to warehouses in Cheetham Hill where he had many contacts from his time in the rag trade. He would use his charms and knew how to cajole them into contributing lots of really good stuff, e.g. “Parka” jackets, coats and jumpers, etc . . . for the Parish fayres.

My children loved coming to help at these fayres, they were as good as I was at selling. My stall was always the clothing one, and women would say to me, “Sally, if you have a jacket that will fit him or her, will you put it under the table for me.” No one had much money, but we looked after each other.

I was also involved in keeping the church clean and I have memories of kneeling on the sanctuary with a hot iron and brown paper pressing out the candle wax off the carpet. A horrible job, but it worked.

My two sons were altar boys for many years up to the time they were sixteen; I encouraged them all to take part in all the activities in the church.  I enjoyed my time and all the work that I was involved with the many various activities.

I used to laugh at Canon, he would approach me and say, “Sally will you do so and so”, and when I asked “When?”, he would reply, “Now!”

It was a very sad day for all of the congregation when Canon O’Connor was moved to another parish. He was a tough act to follow.

There were some lovely priests who followed the Canon, but with changing circumstances, the increase in the size of the universities, more demolition and the rebuilding of communities, the last ten years have seen a great change and the Parish community has witnessed very lean times and the congregation has suffered.

We have fought hard to keep our church from closing and it has been a very frightening time for everyone. Without the help that we received from the Holy Name community, which in later years has been run by the Jesuits, we would not have had any church services for the last two plus years. We owe them a huge thank you for all of their help.

Overall I have enjoyed the last fifty one years that I have lived here in Hulme. I have met many wonderful people, some are still here, some now gone, and I am proud of my involvement at St. Augustine’s Church, and hope to continue to be so for many years as we witness a “New Spring” in the life of this great parish which has survived so much devastation as part of its history.

Welcome to St Augustine’s recently created website which I hope you will find helpful.
I arrived in the Parish early March 2020 to set things up for Easter.  However, after my second weekend we had to close the church as “Lockdown” came into force to prevent the spread of the Coronavirus and the disease Covid-19.
St Augustine’s is a modern church build which was completed in 1968, yet as a parish its history goes back two centuries. In more recent times, the Parish boundaries were extended to take in all, or part of, the former parishes of the Holy Name (which now is a Chaplaincy for the University), St Aloysius, St Lawrence and St Wilfrid’s.
The whole area has gone through a massive demolition, twice. Firstly in the 1960’s huge areas of housing were demolished, leaving only the pubs standing. I remember as a child travelling into Manchester centre by bus via Stretford Road, seeing vast areas of rubble with the odd building left standing, which would have been a “public house”. You could see right across Hulme and Moss Side over to Chorlton and Whalley Range.
Replacing those houses brought the development of Hulme with walls of flats. They, in turn, have been demolished and replaced with modern town housing and apartments.  So the original population has largely been dispersed and the parish now has a multi-ethnic population.
More recently, and still developing, have arrived high tower apartments for the University students and for professional business people who work in the city centre, which itself is expanding at a very fast rate. Retail and leisure, the arts and scientific and engineering research, all part of Manchester’s history, have helped to develop a vibrant area which St Augustine’s now serves. It has been said that St Augustine’s is becoming the most populated parish in the Diocese of Salford, and when you see what is happening it is difficult to doubt.
With this brief introduction you can glean that St Augustine’s is very much at the centre of a very busy area which is getting busier. It is very modern, boasting new high-tech ways of living. It is merging the old with the new.
It is in this setting that St Augustine’s must, like its patron saint, discover a mission to a new world, a very transient population, as well as the local residents who have survived the years and are the mainstay congregation.
The complex of St Augustine’s contains two halls, the larger of which is the home for the Salford Diocesan Archives, which will move eventually nearer to the Cathedral. There is a smaller hall used by the parishioners for meetings after Mass and for small social events.
There are also the offices of “Marriage Care” which have not been as used as much as hoped recently, but we are looking to reverse that. There is a modern presbytery which was designed for use by three to four resident priests, but we can look at how we can best develop the use of this facility.
So there is a great future ahead; I hope to develop St Augustine’s to provide for the spiritual needs of the area. These past weeks have provided me with a time to assess how to we can provide that care in today’s society.
Please keep us in your prayers. “Stay with us, Lord, on our journey.”
Monsignor John Daly VG
Parish Priest of St Augustine’s 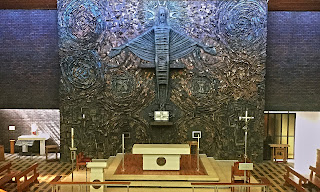 This site uses cookies. Some of the cookies we use are essential for parts of the site to operate and have already been set. You may delete and block all cookies from this site, but parts of the site may not work.